Motorbase Performance’s Ollie Jackson claimed a second career Kwik Fit British Touring Car Championship victory, whilst the title contenders kicked off behind him in the final encounter at Snetterton.

Jackson made one of the moves of the season on the opening lap as he held on around the outside and eventually tucked in ahead of Adam Morgan in the Carlube TripleR Racing with Mac Tools Mercedes. Morgan kept Jackson honest throughout, whilst also holding the chasing pack at bay, but it wasn’t enough to prevent the Motorbase man from taking another impressive and hard earned win..

Colin Turkington concluded one of the best weekends of his BTCC career by claiming an unexpected podium – following his earlier win double – as Rory Butcher’s Ford Focus crashed into the Toyota Corolla of Tom Ingram on the final corner..

Toyota Gazoo Racing UK with Ginsters’ Ingram had been reeling in Butcher’s #6 machine in the latter stages and eventually made his move through Coram on the last lap. The initial tap seemingly came from the Corolla through the right hander but as Butcher’s Focus skated across the grass he then returned to the track and slammed into Ingram’s car at Murrays..

Turkington scampered past and was followed home by fellow contender Ash Sutton in the Laser Tools Racing Infiniti Q50, whilst Butcher crawled home in fifth..

Halfords Yuasa Racing’s Dan Cammish claimed sixth, but he was one of many drivers to get stuck behind pole-sitter Chris Smiley in the Excelr8 Motorsport Hyundai. Northern Irishman Smiley defended extremely heavily from the likes of Sutton and Turkington, but it was Cammish who would eventually see off his effort as he tapped into the rear of the Excelr8 man..

BTC Racing’s Josh Cook suffered damage in an earlier skirmish with Cammish but he also jumped the recovering Ingram across the line to take eighth, whilst MB Motorsport accelerated by Blue Square’s Jake Hill and Excelr8 Motorsport’s Senna Proctor completed the top ten.. 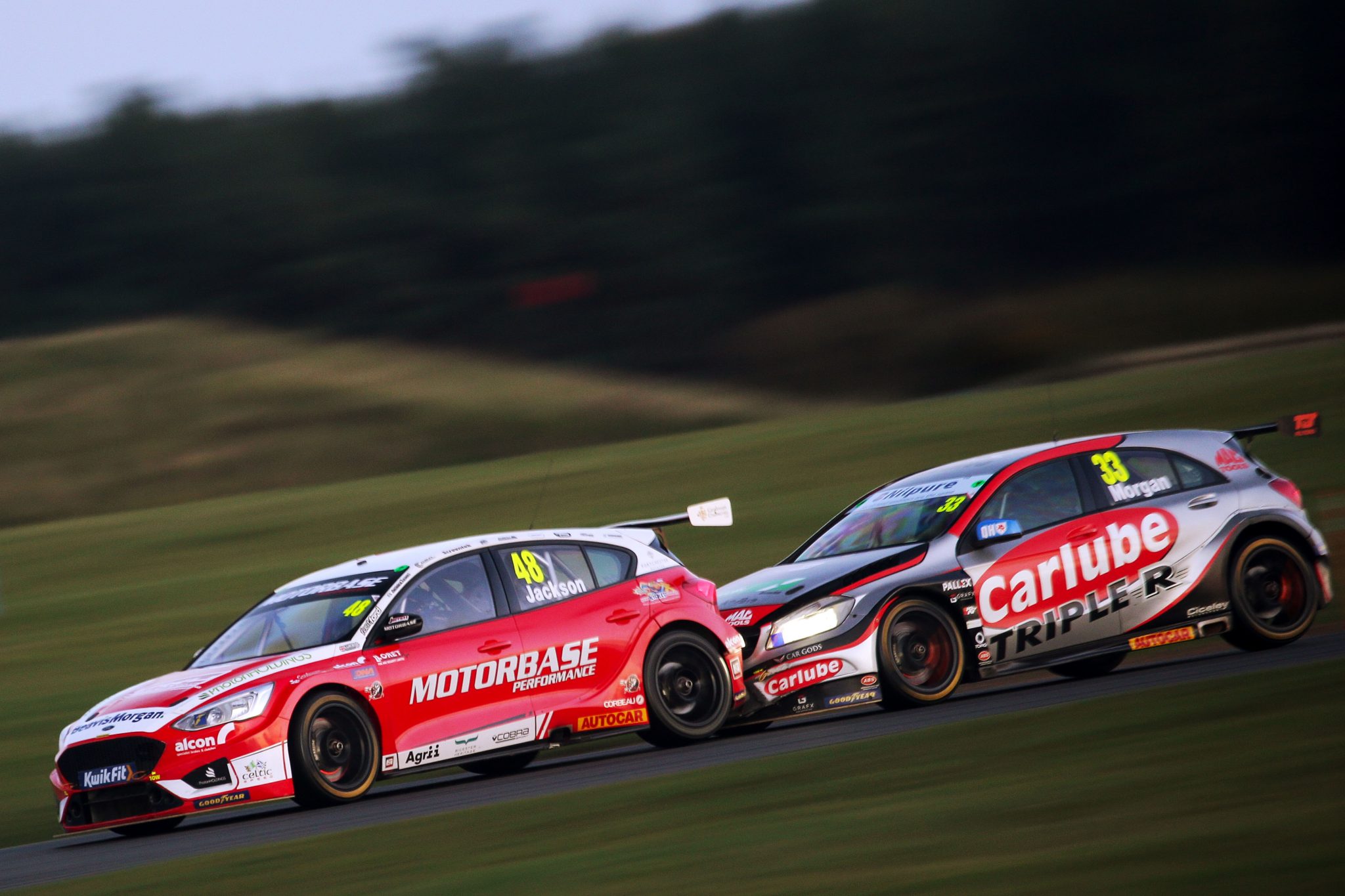 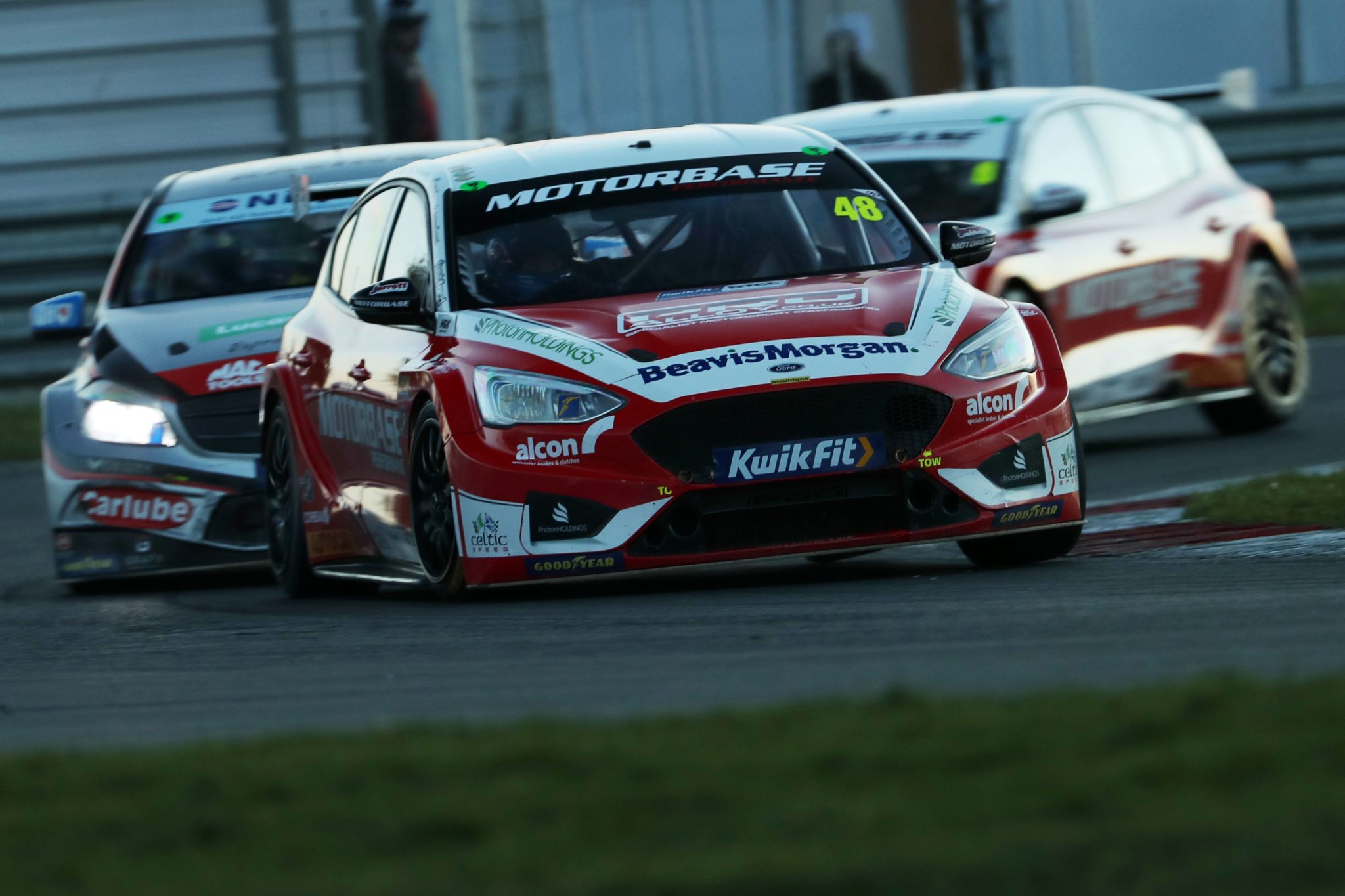 Ollie Jackson said: “The first win was really emotional. This one just feels brilliant – I feel like a race winner already! It’s a great feeling again. I used to win races back in Caterhams obviously. But I think once you get back into the feeling of winning races again it’s definitely something that gave me the confidence to push forward today. It’s fantastic after a pretty unlucky first race when we have the pace, I wasn’t expecting to have such a great end to the day.

“I got a good start again, a good launch then managed to get the tyres switched on right away and it looked like Adam was struggling a little bit to start off with, so I just took advantage and hung on to it for the rest of it.

“I was just focussing on the track, getting the lines right and placing my car. Adam definitely had the pace on me towards the end. His car was probably set up to work in the second half of the race and mine was for the first half. All I had to do was focus. He gave me a good old push for the last few laps but thankfully I just held on.”

Adam Morgan said: “That was pretty tough! The car was a little bit loose through turn one and normally that’s a good corner to set up to overtake into turn two, but without the grip, I left myself pretty open to attacks from Rory. It’s a mega result for the boys, the team have worked faultlessly this weekend and the cars been absolutely on it. I’m just really chuffed for everyone at Carlube TripleR Racing with Mac Tools.

“Ollie is a strong defender. He knows what to do with the car and where to put it. He drove faultlessly, didn’t make a mistake. That move around the outside of me on Agostini on the first lap, I’ll lose some sleep over that tonight. Overall though, a really great weekend and well done to Ollie.”