Motorbase Performance driver Ollie Jackson has won his first ever Kwik Fit British Touring Car Championship race after coming out on top of a truly sensational contest at Silverstone.

The UK’s elite motorsport series has delivered time and time again down the years and this bout will go down as one of the very best as Jackson scored a famous victory.

Laser Tools Racing’s Ash Sutton went from 26th to second by the finish, although he was later relegated post-race to third, which was just one of many amazing stories in the reverse-grid finale at the Home of British Motor Racing.

The action commenced in dramatic fashion with one of the biggest accidents in recent years when contact between Matt Neal’s Honda and Rory Butcher’s Ford on the run down to Becketts sent the latter into a heart-stopping barrel-roll. The #6 machine of Butcher had slid across the grass at high speed, before making heavy impact with the barrier and rolling wildly back onto the circuit. Thankfully, Butcher immediately emerged relatively unscathed from the incident – testament to the safety of the BTCC cars.

We had already lost championship contender Tom Ingram after his Toyota was bumped into the barrier, following a scrape between Tom Onslow-Cole’s VW and Carl Boardley’s BMW, whilst female racer Jade Edwards endured contact with Andy Neate’s Ford for the third time in as many races.

It was the frightening accident involving Neal and Butcher, however, that brought out the red flags with barrier damage and his stricken car needing to be removed.

If that wasn’t enough drama then the rescheduled 12-lap sprint had it all, with no fewer than six contenders for victory.

Jackson had jumped Team BMW’s Tom Oliphant off-the-line, and although he briefly lost the lead for a matter of seconds later in the race, he fought back well to return to the front. 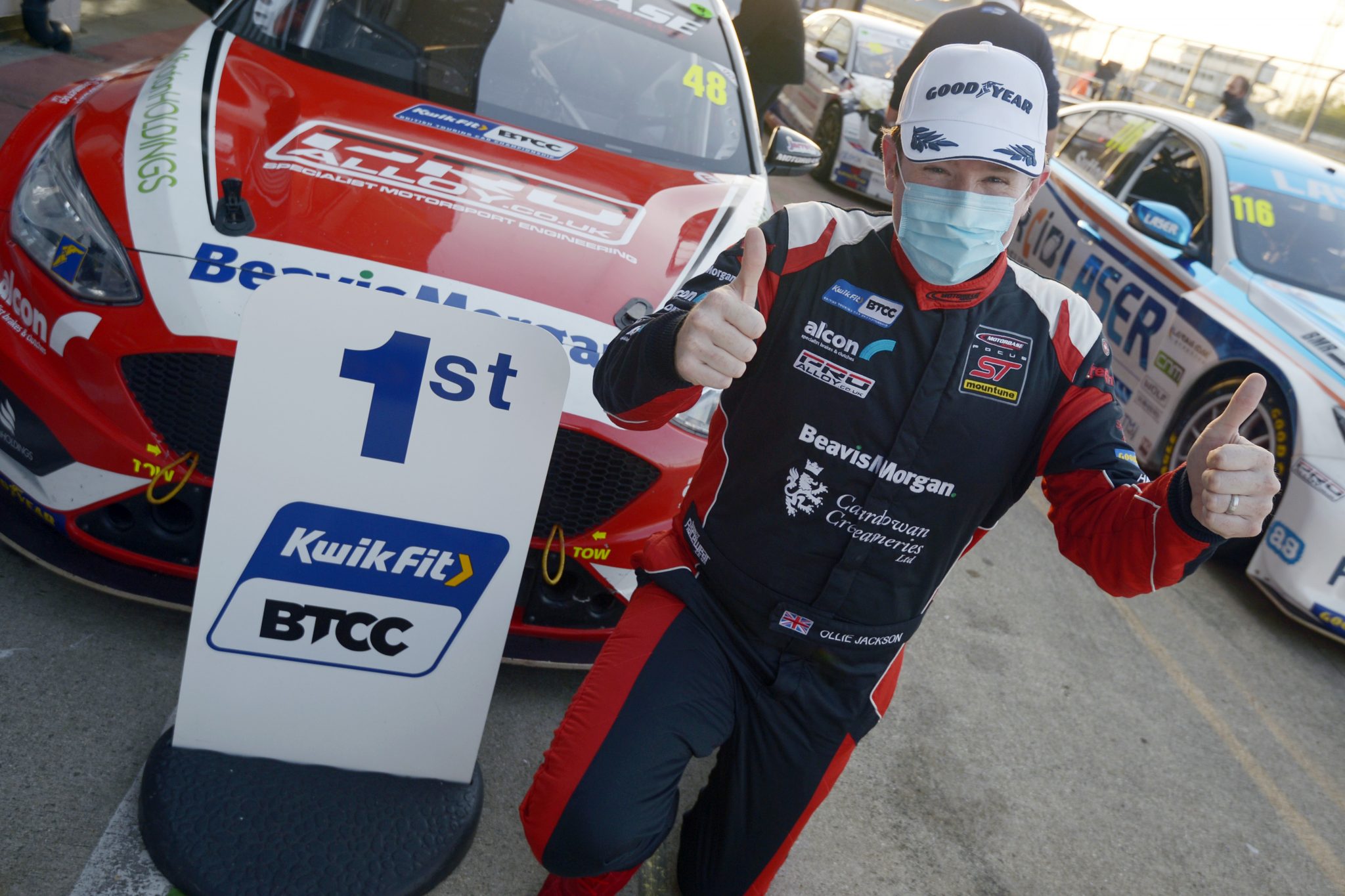 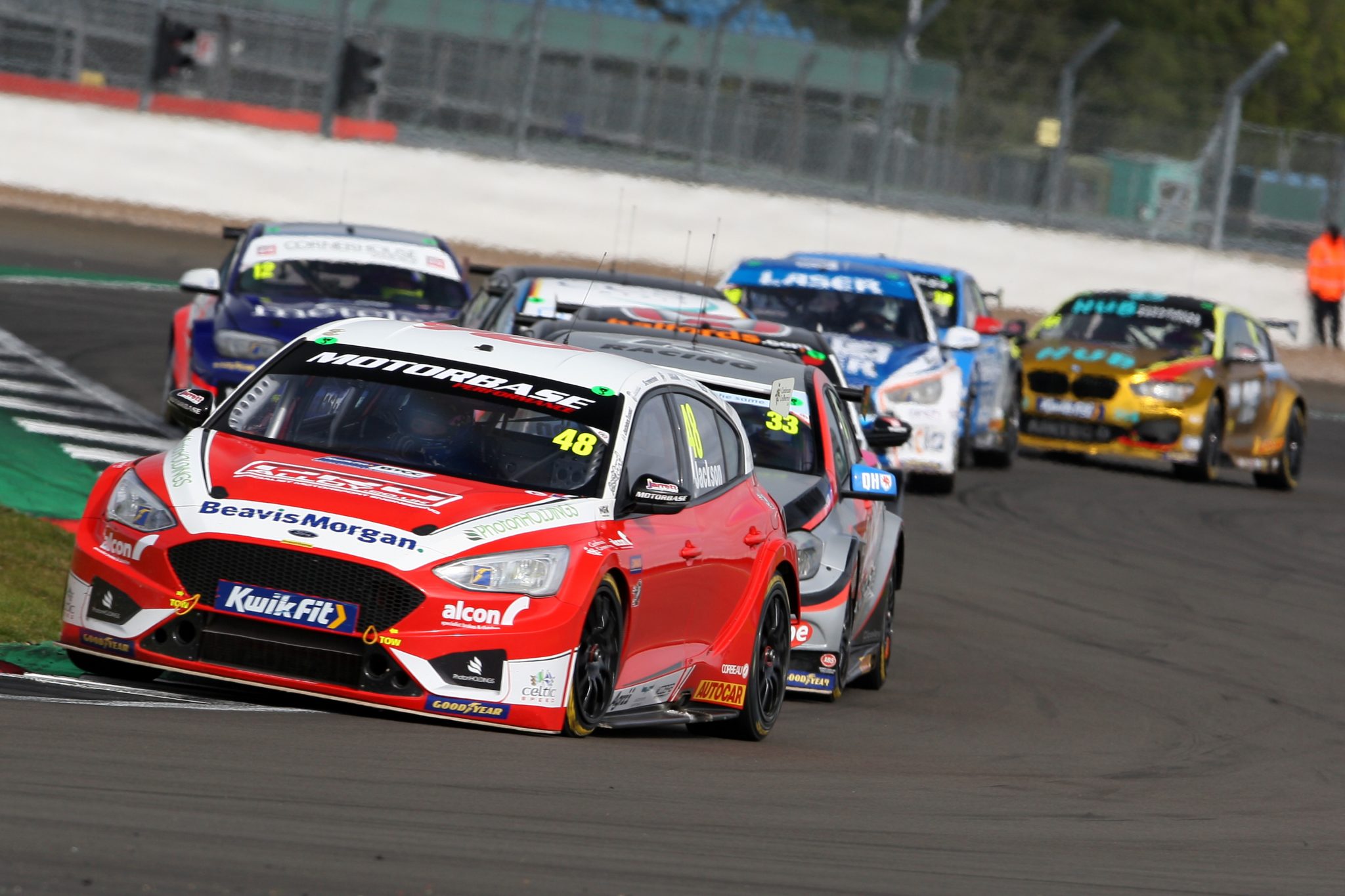 It seemed only a matter of time before one of the big guns would get by, but Oliphant was soon having to worry about the likes of Ciceley’s Adam Morgan, BTC Racing’s Josh Cook and Tom Chilton, as well as the absolutely charging Infiniti Q50 of Sutton.

Laser Tools Racing’s Sutton had already sliced past numerous rivals and was somehow staring at an unlikely victory as the race drew to an unforgettable climax.

Positions changed hands several times before Sutton went side-by-side with Oliphant through Copse on the final tour. Sutton eventually made the move stick, but it had given Jackson just enough breathing space to hang on at the front.

This was one of those moments that the usually packed grandstands would have been on its collective feet as Jackson crossed the line to take a hugely popular victory from Sutton and Oliphant. The final two podium positions were reversed post-race, however, when Sutton was adjudged to have gained an unfair advantage during his battle with Oliphant.

“I’m really really emotional,” said Jackson. “It was terrible obviously for Rory, thankfully it sounds like he’s okay. Amazing day, after not a brilliant qualifying, and to make it back up, to get a good start and to actually take the win is amazing – I’m living the dream.

“I wanted it. It’s taken long enough so I wasn’t going to give it away easily this time. I absolutely gave it my all.”

“When you’ve got a car that good underneath you and I could see that Tom was struggling a bit with Ollie and there was a bit of elbows going on there and I thought I would try and take advantage of that. It kind of fell into my hands. Tom gave me a load of racing room through turn one and I respect that, he didn’t run me wide or anything like that. He gave it his best shot with Ollie and unfortunately there weren’t enough laps for me to have a go.”

Halfords Yuasa Racing’s Dan Cammish collected some hugely important points with fourth, whilst Morgan, and the impressive Excelr8 Motorsport Hyundai of Senna Proctor were next in the order.

Cook, Chilton and Laser Tools Racing’s Aiden Moffat got shuffled back late on, whilst reigning champion Colin Turkington had to settle for tenth